CTV NEWS EDMONTON — An oil refinery north of Edmonton has added a four-legged friend to its workforce, but Bolt doesn’t eat, bark or even breathe – an advantage, the refinery expects, in emergencies.

Bolt is one of two semi-autonomous robot dogs at the Shell Scotford Complex.

Shell is working with U.S. robotics company Boston Dynamics to develop the technology so it can be useful in environments like the crude bitumen upgrader in northern Alberta. “It’s still quite an experiment,” maintenance manager Doug Loree said.

“There’s going to be lots of different kinds of rounds and activities where initially there’s a lot of human intervention to train the robot so it can be useful for us.” 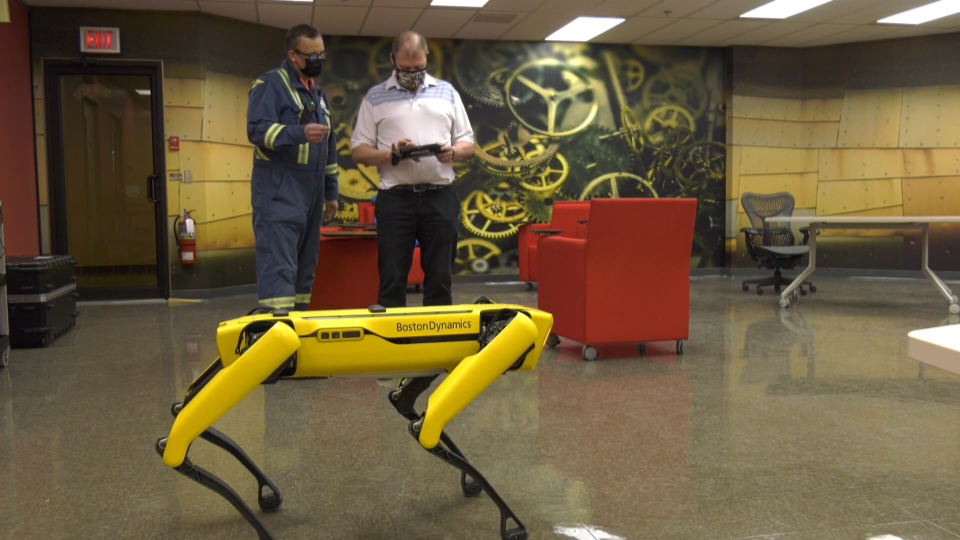 The robot has five cameras. More peripherals can be attached so Bolt has 360-degree views, thermal imaging or gas-detecting sensors.

Shell’s hope is that Bolt will eventually be able to do tasks deemed too redundant or unsafe for humans.

Bolt’s human co-workers are curious about what it can do – and, naturally, what it can’t.

With more and more jobs being lost to automation around the world, Loree says some employees wonder what Bolt – or multiple Bolts – could lead to.

“Some people definitely see the threat or risk in it,” Loree acknowledged, adding that they have become more excited at the possibilities as they’ve gotten involved with the project.

He added: “I think it actually changes jobs. I think we can find ways to have it do the simple things that really aren’t that challenging or necessary for people to do.”

Eventually Bolt won’t need to be controlled by a person and remote. Like a robot vacuum, it’ll learn to return to base if its battery – which lasts around two hours per charge – is low.

For now, Bolt’s worksite walks come with supervision, but it won’t be long until the proverbial leash comes off.

“What happens when they turn on you?” CTV News Edmonton’s Dan Grummett asked.

Loree laughed. “I think we’re pretty far from that.”

With a report from CTV News Edmonton’s Dan Grummett